By accepting you will be accessing a service provided by a third-party external to https://www.percheronllc.com/ 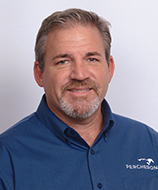 HOUSTON, TX – September 2014 - Percheron announced the promotion of Kevin Watkins to Regional Director, Permian Basin. Kevin will be responsible for the oversight and quality execution of projects as well as business development in the region. He will be working in the newly established Percheron Regional Office located at 203 W. Wall Street, Suite 1104, Midland, TX.

“We are excited for Kevin to take on this new role with Percheron,” said Kathy Miller, President of Percheron Energy South. “He brings extensive expertise and will be integral in Percheron’s growing presence in the Permian Basin.”

Kevin has over 16 years of land experience working in both field landman and supervisory roles in many different states. He began his landman career with Portman, Fleniken and McCall as an independent contractor in 1996 and has worked for the organization through the transitions to OGM Land Company and now, Percheron Energy. Previously, Kevin served as a Project Manager for Percheron Energy South, stationed in the Midland, Texas office, where he supervised runsheets, curative and due diligence acquisitions.

Kevin is a CPL and holds a Bachelor’s of Science degree from the University of Houston. He is an active member of the AAPL in the local PBLA chapter. He resides in Midland, TX spending his time with his three children Garrett, Grace and Jack pursuing their interests of scouting, baseball, softball and soccer.